THE RISE OF SOUTH KOREAN CULTURE IN THE WEST

In the past 25 years, South Korea has been planting seeds to export its culture, cinema and K-pop to the outside world. And this has been achieved with many television programs and cinematic releases drawing in large audiences throughout the world. 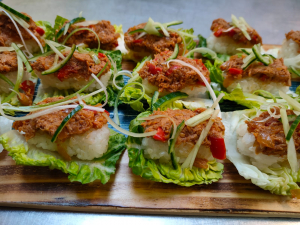 ht in at the top of the Billboard chart in America. We as a family managed to stop in Seoul in South Korea on the way to Australia. This we did as we live quite near to New Malden which has a large Korean population, and we were offered a guide to take us around Seoul and up to the north-south border. Plus we could not afford to stop in Japan!

We found it an amazing place with colourful food markets and wonderful street food. The people of Seoul could not be more helpful, anywhere we were going. I say all this because we enjoyed the food so much, with the wonderful sti

cky fried spiced chicken which always goes down so well wherever we offer it. Kimchi, now a widely known fermented cabbage dish with great health benefits. Barbecue marinades, bulgogi add flavours to meats and of course, there are different ones for different meat 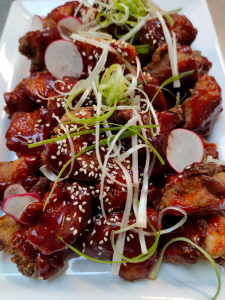 Gochujang, another great spicy addition to meat dishes. One that we love to add to stir fries is Ssamjang. This with some Korean soy sauce can give noodles and vegetables a wonderful deepflavour. We ate in some great restaurants, including a classic Korean barbeque, entailing sitting on the floor and cooking your food on a traditional hot plate.

It was there that after our meal we were invited to sit with another family and drink local alcohol with them. All in all, Korean food is there to try and is not quite Japanese or Chinese, but makes its own culinary mark in Asia.